FFA is a dynamic youth organization that changes lives and prepares members for premier leadership, personal growth, and career success through agricultural education. FFA is an extracurricular student organization for those interested in agriculture and leadership. The letters “FFA” stand for Future Farmers of America. 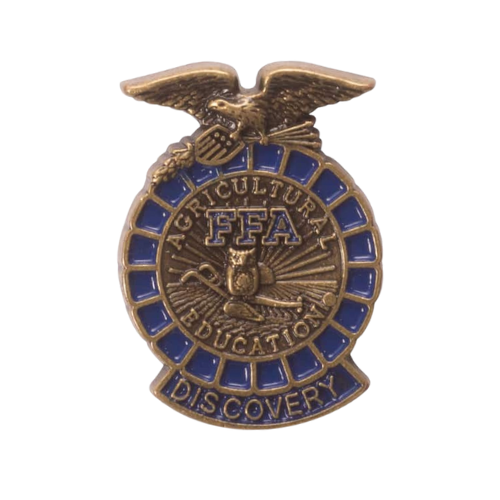 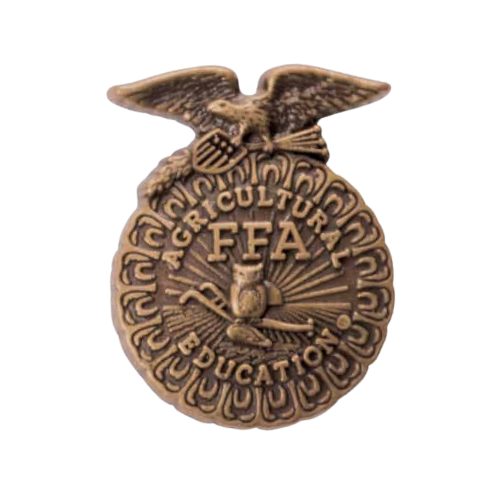 The Greenhand Degree is a degree given to first-year high school students who have demonstrated that they have a thorough understanding of the history and purpose of FFA and have an SAE plan. 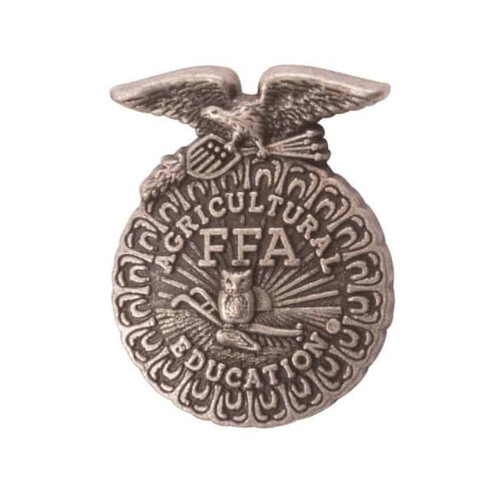 Following being awarded a Greenhand degree, an active member can then apply for the Chapter degree. This is accomplished if members are enrolled in an agricultural science course, have an approved SAE operation in place, demonstrate their leadership capabilities and passion for FFA by being involved in their local chapter, and have completed at least two semesters of agricultural science courses about the freshman level. 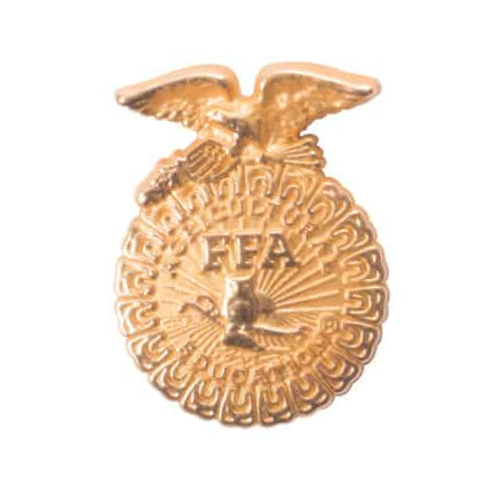 The State FFA Degree is the highest degree in each state. This degree demonstrates the student has put an exceptional amount of time into their SAE and local chapter. It is awarded after receiving the aforementioned degrees. 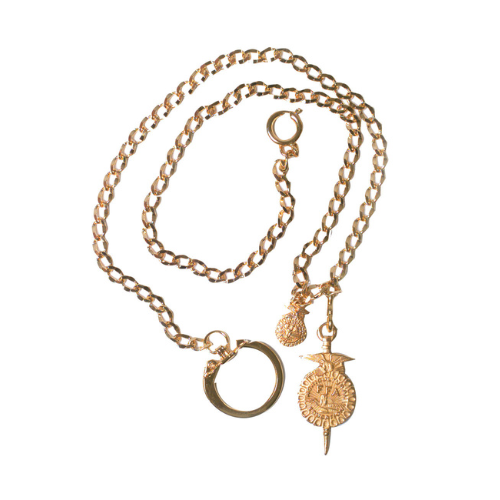 The American FFA Degree is the highest degree an FFA student can acquire. To apply for this degree, a student must demonstrate the most outstanding involvement within the chapter and provide records of their supervised SAE project, which should display their ability to plan, manage and finance with expertise. This degree is difficult to earn but worthy of the hard work required.

What does the FFA motto mean? The FFA Motto is meant to be something short and easy to remember. This motto gives members 12 short words to live by as they experience the opportunities in the organization. The FFA motto was created at the first FFA Convention in 1928 by the members. 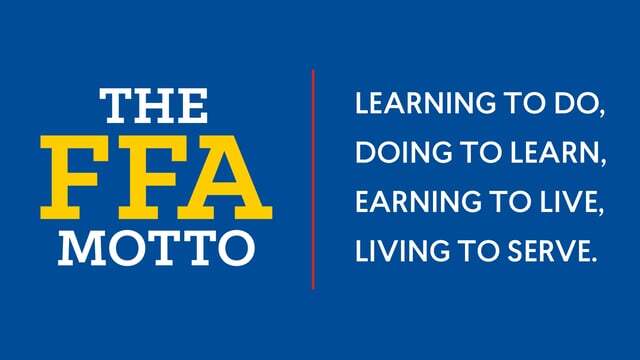 I BELIEVE in the future of agriculture, with a faith born not of words but of deeds - achievements won by the present and past generations of agriculturists; in the promise of better days through better ways, even as the better things we now enjoy have come to us from the struggles of former years.

I BELIEVE that to live and work on a good farm, or to be engaged in other agricultural pursuits, is pleasant as well as challenging; for I know the joys and discomforts of agricultural life and hold an inborn fondness for those associations which, even in hours of discouragement, I cannot deny.

I BELIEVE in leadership from ourselves and respect from others. I believe in my own ability to work efficiently and think clearly, with such knowledge and skill as I can secure, and in the ability of progressive agriculturists to serve our own and the public interest in producing and marketing the product of our toil.

I BELIEVE in less dependence on begging and more power in bargaining; in the life abundant and enough honest wealth to help make it so--for others as well as myself; in less need for charity and more of it when needed; in being happy myself and playing square with those whose happiness depends upon me.

I BELIEVE that American agriculture can and will hold true to the best traditions of our national life and that I can exert an influence in my home and community which will stand solid for my part in that inspiring task.

The FFA Creed was written by E.M. Tiffany in 1928 and was officially adopted by the National FFA Organization in 1930. The creed was revised twice, during both the 28th and 63rd National Conventions, to form the one we use today. A new FFA Creed was proposed in 1990 and overwhelmingly rejected by a committee of delegates to the national FFA convention. Previous to the founding of the FFA, there were two other creeds used by boys' and girls' agricultural clubs. These were titled, "The Country Girl's Creed" and "The Country Boy's Creed." Both have similarities to the modern FFA creed used today.

A small Ohio village, Fredericktown is the birthplace of the FFA Jacket. Agriculture educator J.H. (Gus) Lintner commissioned a jacket for members of the local FFA chapter to wear to the 1933 National FFA Convention in Kansas City, MO., as a part of their FFA band uniform. The iconic blue and gold design was so popular that it was adopted as the Official Dress of FFA members. 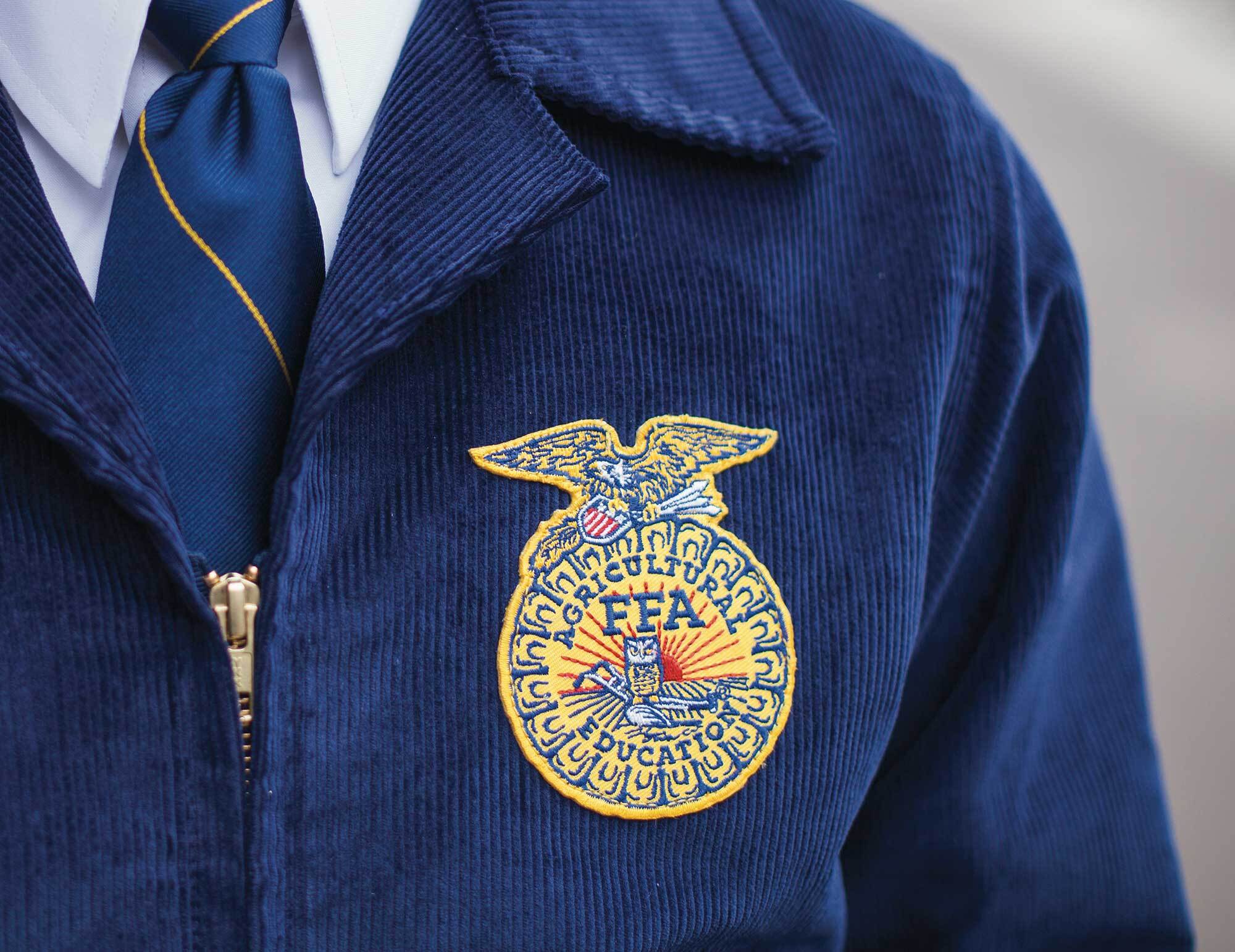